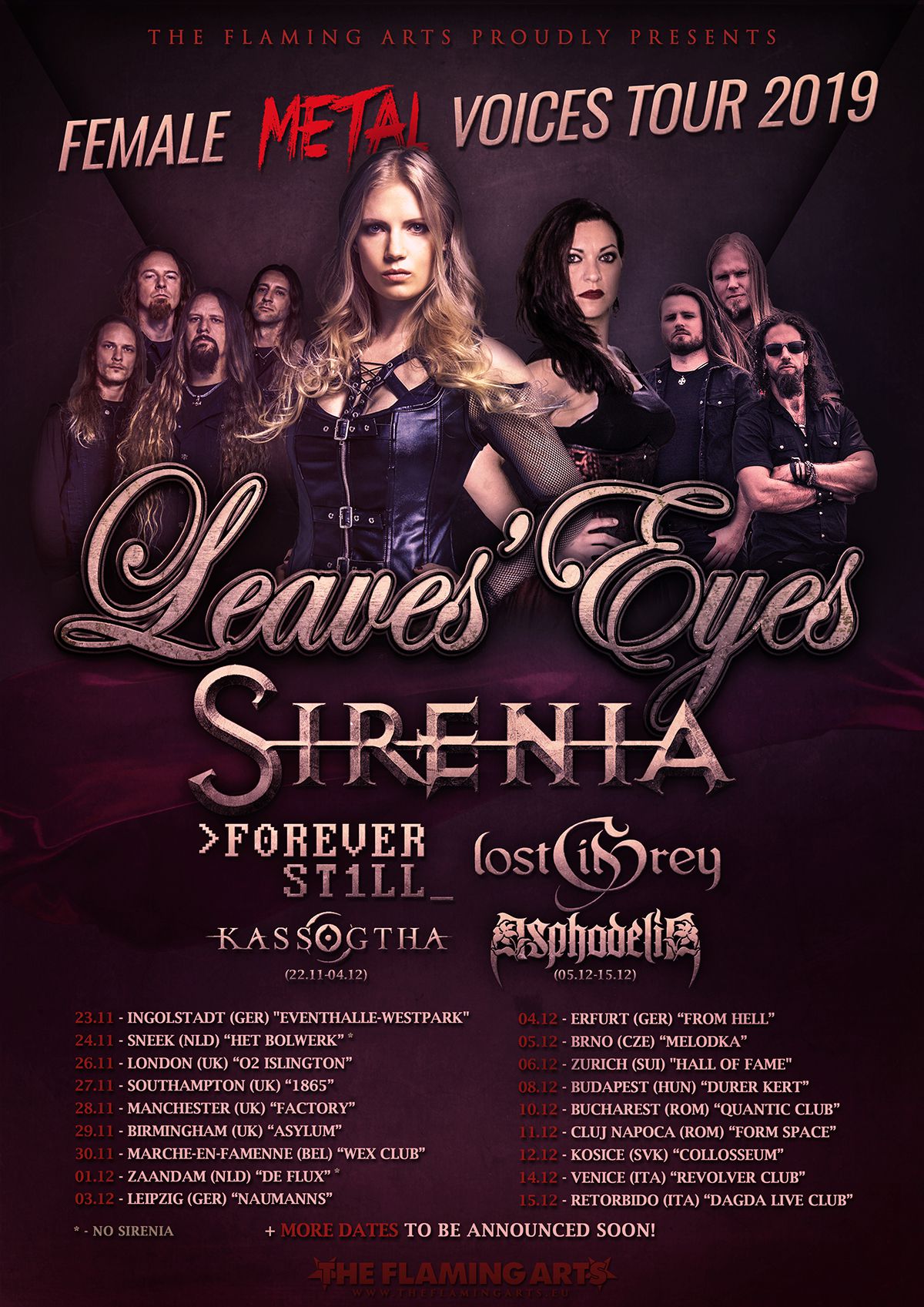 The carnival of forgotten and despaired
is preparing to set sail
for the stages in Europe once again.
Get ready to hop on board
and lose yourself in the Grey.

We are beyond thrilled to inform You that LOST IN GREY will be performing on the FEMALE METAL VOICES TOUR 2019 together with LEAVES' EYES, SIRENIA and FOREVER STILL, supported by KASSOGTHA and ASPHODELIA.

Here’s the list of confirmed dates, a couple more to be announced:

Yours sincerely, Lost in Grey

See the official statement below:

The Flaming Arts Agency proudly presents the 2019 rendition of the yearly FEMALE METAL VOICES TOUR! This November and December, a massive package headlined by LEAVES’ EYES (DE) and SIRENIA (NO) will tour all over Europe and the UK, joined by FOREVER STILL (DK), LOST IN GREY (FI) and supported by KASSOGTHA (CH) and ASPHODELIA (IT) on selected dates.

LEAVES' EYES has always been a band of superlatives: The international group has toured on five continents, playing concerts in more than 50 countries. Their live shows are spectacular events with breathtaking stage scenery and Vikings on stage! The chartbreakers LEAVES’ EYES just released their smashing single NIGHT OF THE RAVENS and a brandnew EP will be in stores at the start of the tour on November 22nd 2019!!! Welcome the Vikings!

Hitting the charts and selling out venues fully packed of happy crowds since 2001, SIRENIA is by now one of the most genre-defining bands of the gothic metal scene. The band will provide the attendees with some of the classical gothic metal masterpieces, as well as the freshest offerings from the Arcane Astral Aeons album.

FOREVER STILL, the fresh hope for Danish female metal scene, have cherished some of the most breathtaking songs for every night of the tour. Currently, the band is crashing the listeners' hearts with their last album Breathe In Colours, released earlier this year.

LOST IN GREY, a new name with yet so powerful and tight Finnish metal sound, are offering the solid melodic death metal foundation, skillfully mixed with lots of different elements ranging from symphonic to folk music. Check out their new album The Waste Land!

KASSOGTHA is hell of a groove machine from Switzerland ready to drop your headbanging faces to the stage front. The band will tour in support to their fresh EP The Call, a haunting mix of melodic, and not so melodic modern metal.

ASPHODELIA, the rising star of Italian symphonic-flavoured melodic metal, will traditionally join the female metal voices tour lineup to come and conquer the new horizons. Dive deeply into the obscure theme of the afterlife with their last album Welcome Apocalypse.

Check out your usual online outlets for the tickets, and see you in the pit!